You are being watched. 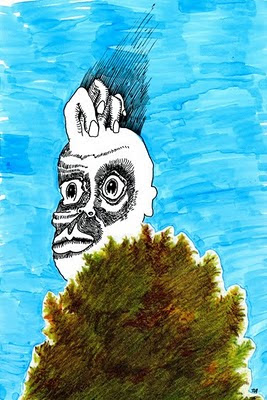 Graciousness can't even begin to describe Creeping Tom's ecstatic demeanor post-interception of personal moment. He is king of all that should not be seen; in the community of various voyeurs he is reigning upon all that is so stupid its creepy. He is Creeping Tom, they say. His eyes glitter like six year old jumpsuits lost in garbage pit. His stomach lining spits acid with gilded delight; those poor enough to get lost in the haze of his belch realize their lives were never worth living. A tube of Rolo's clutched in his hand, Creeping Tom leans closer, drool intact. He stares out into sexualized precious creation and sneers at all that is so easy it's visible. He's gone for the duration: that time period known as a lifespan. Chemicals taken to the dome in anticipation, he is not one to lose sight of what is pristine. Like crystalz of all pureness, every stolen sight is of his mental collection: a man picking his nose unawares, two teenage lovers sneaking a kiss with cigarettes clutched in fists, an obese man slipping his hand down his pants with a wry grin on his face. They all hold sway in the tangled mind he loses each day. Oh those that have no idea! Oh those who keep themselves from those who seek them! All in vain! All for naught! Keep yourselves futile says Creeping Tom. He will find you. His daily shift at the strip mall down Rt. 45 has been a shifty one alright. He's only received a sliver of dark satisfaction thus far. He feels his grip upon his sexual fears slipping as though lubed with grease of bacon. Nimble fingers play upon the web of his midnight thoughts without suppression; within the creaking shelter of his brain there is hope for relief. All that brings such a thing is a fleeting moment of sick embellishment. He's a yesman for chinks in the armor of the public. His eyes stab holes in the perceived anonymity of the faceless existence. Though his day is as of yet to be fulfilled, his twiddling fingers give him reason to believe there is something about to reveal itself. Something that doesn't want to be seen. Popping another Rolo for sweetness, his eyes scan the parking lot for a real time fissure in the world of saving face.
Posted by Dirty Consumer at 3:01 PM