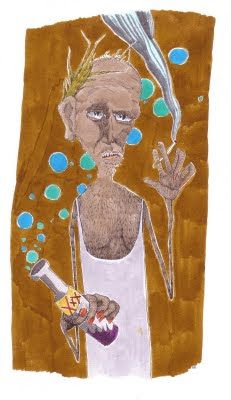 The knife of my mind continues to pare down my heart like a coin operated fortune teller with automated responses. And the coins I insert are my memories. And I will nurture my vices like children and give over every rapturous moment to the reckless abandon of a bottle getting drained while the gutters run and the alleys sag and the buildings loom and the men slink. The cutlery hangs upon the magnetic knife holders nailed into the particle board. You have this passion around you like a static charge and you don't know where it goes or why it's there. You have this sense of pain that lets the blues ink your vision very slowly. You have this way of letting me know that I am not going anywhere with the self deception turning in my mind slow like a cement mixer. It's all there, waiting to be laid out and leveled out, but it's liquid now. It hasn't hardened, this silly sense of sorrow. Those bottles and those smokes are a double edged blade that sends those thoughts running while inviting them in. I want to live a life with a real sense of pain. Not an imagined one. I want to pare down my melodrama into a catastrophe of reality. I want the car wreck out there on the plains where the ever droning countryside wraps itself about the misery like an electric fence to be something fictional and forgotten until it's real. Until it's real, I want this tired dramatic affair to lose itself amongst the branches of my temporal thought patterns. The forehead is like some runty little child holding a magnificent object behind its back, clutched in its sticky hands the source of that which causes us to be what we are. So here we are, hiding everything behind our skulls, leaving behind that which torments us only to turn the corner to fall straight into the loving grip of systematic sadness. The realization that the drama is self imposed is a quiet victory.


Posted by Dirty Consumer at 9:00 AM No comments:

Affluence: Breeding Ground for Self Pity. 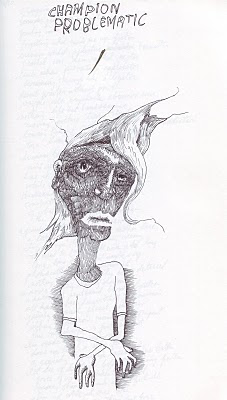 When the eyes of his lover meet his, he folds his arms; as if he consciously wishes his limbs to resemble the frail crosses bridled with plastic flowers along the freeway underpass. Rest in peace they say. "It's funny that our bodies fit but our minds don't." He whispers it coyly and she doesn't hear him and smiles, taking the murmured statement as positive, just as the tone was. Positive and sexy; uplifting, even. Yes, it is funny that the emotional realm can have everything to do with what isn't physical. His perceived empty inside just blowing cold and scary, depthless, not the truth, not truthful. But not depthless as in endless, depthless as in shallow. As in a matte gray expanse held close to his eyes; so close as to render his eyes useless, all blurry and unfocused. And that is what he champions in this life: disconnection, loss, puerile subversions, massive blood loss (of the mental sort), creation of doubt, anonymity, the feeling of dull aching. Problematic and decisive. Self fulfilling and all inclusive. This club welcomes us all, her eyes seem to say as she slips an imaginary knife in his gut. "You've just gotta be willing to see what's real and what's imaginary." Don't let this ever present heart pull you 20,000 Leagues under because there isn't anything but ropes, razors, firearms, exhaust pipes, and pill bottles down there. The stereotype of melodrama prowls down there. Down there where you can't see that these fantasies of abandon are immature because of the lack of sunlight. Just sulfur burning your eyes and a single blinking light attached to a predator. Glass bones and pressure sensitive frames, well we've got those up here too. "So don't," she says, "don't go down there."


Posted by Dirty Consumer at 9:00 AM No comments: 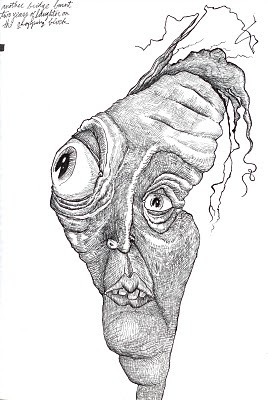 Another bridge burnt, she places with steady hand two years on the chopping block. A baby bird alights upon her shoulder and looks into her eye like the past. He's been having dreams of her, contemplating some way to go back in time. He's been leaving behind traces of guilt like spent up moments loose in the current. He wants what he's lost. She coos in his ear as a mother bird would. He realizes that he's in love and there is nothing there but an empty memory all cut up and groaning with all of the dreams and anonymity he knows now. What were those times on the platform connecting the dots and feeling like there was no way to feel but good? The moment when a confession of affection was given he had a stitch in his step like the yarn wrapped around his heart strangling. It was because of the hurdles in the track, the entire three years dwindling trying to pretend he didn't have the feelings he had just so he could say he wasn't a home wrecker. But he was. And he still is. And it just pours out like a scarf wheeling from the needles of that endearing old woman on her porch caring and dear. Knitting something for the past and now the future. Oh this ever present heart forces him against the winds. He'll just continue flying against it and curse the barriers that he doesn't even know exist. And mother bird lets out her wings so far away as he just flutters and wheels across the sky like some tender moth spun up in the web. He sees it though. And he wishes he was there.
Posted by Dirty Consumer at 9:00 AM 2 comments:

Storage Space for Past. 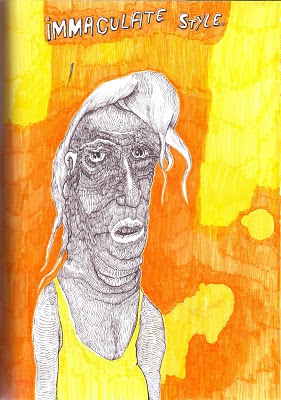 He's got no cure for old noise. As in to say he'd follow you through the underbrush near the interstate, around the bridge embankment and towards the foundation of the concrete monolith to where all the burnouts tear holes in themselves with crystal pipes. And the old noise would be a metallic and vintage reproduction of a Roy Orbison song, and Patsy Cline and Howlin' Wolf would sing duets as the tenuous grasp on reality fell further like a tattered old curtain keeping the environment from steeling too steady a gaze upon your existence. He's got immaculate style and that ain't all. He's got spit. And teenage blues. And severed ties. And a switchblade that springs from the pocket like a broken tooth on a clown. He sneers at you in the halls of the haunted house knowing you'll always be older than him. He takes your ticket at the box office with a bubble of spittle keeping him company. He gets paid in wooden coins and bark chips. Minimum wage but it seems like more than you'll ever have. Those tennis shoes keep in time with the pulsing beat of something that seems old but is new and you are not one of them because you have a memory and he lives in a shoebox torn from a treeline while you have a garage door opener pinned to your lapel like a brooch. He presses the button and the door opens really far away, all rusty and sallow. But you can hear the creak of it. You can see the way it creaks in his pinkly rimmed eyes looking at you like you should've been done with this a long time ago.
Posted by Dirty Consumer at 1:07 AM No comments:

That Halo All Shiny. 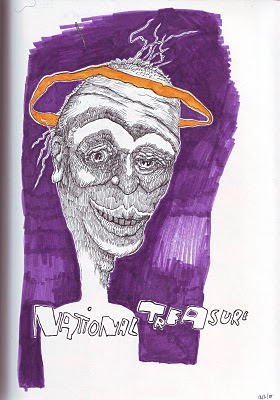 When he opened the door in the back of Roosevelt's head it felt like pissing on a national icon in a fit of passionate inebriation. The L.A. Lakers swam about his mind, pumping up their high tops before jamming on his hoop, shattering the backboard. Abraham Lincoln turned his head just at the right moment to the surprise of John Wilkes Booth and Truman hesitated with his hand over the switch with a single tear rolling down his cheek like a stampeding buffalo traipsing along the great plains with the arrows whispering amongst it's ears. All of the canals were built when malaria was taken away. And he is a National Treasure as he walks amongst the inner cognitions of a nation's makers, within the brain of the past that made the future. The big stick is still there, except now no one speaks softly. The exclamations echo off the walls and foreign policy is a game changer with a red face and urban sprawl growing like acne upon the face of the earth. The Monroe Doctrine feels like a long time ago and all those tired souls stumbling to the desert are still cursing Manifest Destiny. And it's wasted. And we're here. And we've lost the pill bottle that held our pharmaceutical escape. And as the final shot hangs suspended in the hush of the crowd as the clock clicks to zero with a plethora of dreams and destinies hanging on the results of this game, Mount Rushmore just sits there, all five of them knowing they are made out of a mountain that was sacred to those they helped destroy. The guilt is like a glimmer in the periphery; a superfluous idea amongst concrete pillars of dust that shouldn't be hard. But they are.

Posted by Dirty Consumer at 9:34 AM No comments: 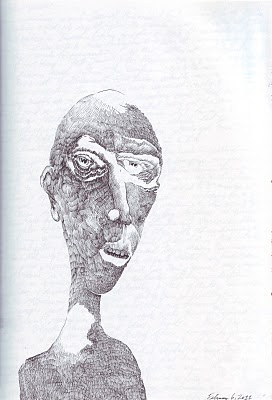 Keep close and listen now: those that know you will be left to wonder as you ascend up the tractor beam. Who were you? Where are you now? Did they ever know you? Well, now the answer is clear. Probably not. For one thing, they never thought you to be the type to be abducted by an unidentified object, let alone a flying one. And in the darkness of the trembling woods, no less. And they're sure you'll return with a corncob pipe swinging from your toothless gob while lisping a diatribe of accusations. The conspiracy theories will tumble from your mouth as if your esophagus was the favorite playground slide. As if the the nations children were all just minute details in an overwrought plan designed to make us believe science fiction had taken you for a ride. You took a Star Trek. You went where no man had gone before. You lost fifty dollars to a space card shark and dived to the bottom of an ectoplasm fifth of space vodka. Good for you. When you're watching the documentary film the fringe director arranged to cast a light of derangement upon your structuredly unstructured plight to the chagrin of your family lawyer, notice the glimmer of amber light in your eyes moments before the pine sways eerily to the futuristic whir of the cataclysmic obstruction in your life, to the start of your eccentric life of ravings, the stop to your melodrama of mundanity. Notice that you had a light in your eyes like coils within the toaster as your breakfast slowly burns. You had something annoying and subtractive fleshing itself out in your mind even before this tragedy of interstellar proportions descended upon you. You were something all unspun and poorly dealt to begin with. Jean Luc Picard had nothing to do with you.


Posted by Dirty Consumer at 9:48 AM No comments: