A Comedy of Errors. 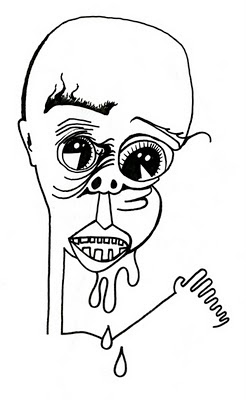 Lowlight bitches saunter like streamers hanging in ditches with stitches holding together their elbows like hinges. It's evening now and tumble deeds for cars roll on down the lonely plains keeping the bankruptcy attorney in love. Without his slobbering child to keep in line he knows he'd be king. He's several beers deep as he ponders why all of those under exposed women he wants in his snapshots keep flinging their panties to someone else. The door slams wide open in the dusty wind and he stands there agape; minstrel, tuneless in the sun, strings popped. It might have something to do with the dim googly eyed toddler of wonder he knows must be, at this ungodly hour, wheeling around the front room with a dumpling hanging out his diaper. So stupid, he thinks. This is why he drinks. This is why he never got nowhere. It's 2 past whatever he once thought was early and the careening boob of a bartender lulls down, easily sweeping the grub bucket underneath the man's chin into oblivion. The grinning wildeye barman replaces it with something else. Looking down, a grin scatters the man's gaze and everyone in the bar knows where the toddler at home got his vacant stare. Though this easy-grinding desk jockey throws his own son's accusations out the window, they all know: You beget your son and thus beget yourself. He stumbles from the tavern dripping spite: "Sir, could you spare a minute to save a child?" The charity gatherers are on the street in full regalia. It is two o'clock in the afternoon. He crouches in the glare of unholy sunshine. An arc of spew springs from his mouth, hitting the pavement in a splatter effect so unlike beauty it's unavoidable. The not-for-profit beggars careen as far away from this wreckage of a man, no doubt running off to some other change in policy. Oh why do they ask for my treason? I've given up my wayward child. Seven fingered like the serpent with one more digit added, this toddler of wrath and pain was slowly sucking the dredge closer. Those banks that were his sanity have eroded long ago yet this managerie of electric drunk continues on. He is a comedian and his last show is years from now.
Posted by Dirty Consumer at 9:00 AM No comments:

Superior Treatment for Blimp with Nothing. 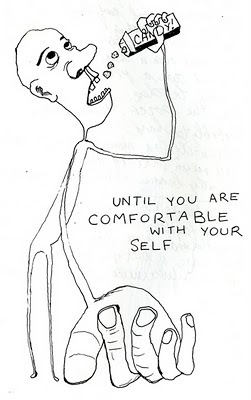 You're tooling the upper echelon of the atmosphere displaying your candy feathers. Dancing about with sweet bits wrecked between your teeth like dreamy forcepts extracting pleasurable rapture, you don't know that the sugar fuels all that keeps you sentient. The sentience only goes so far. It's like a twig snagging the summer dress of the catatonic mental defect wandering the woods post-escape. It only presents itself as an unnoticed blip on the radar. As we all know, becoming aware of one's self is a treacherous journey down a one-way sluice chute lined with broken glass and sexual predations. The path ends with a throned monkey telling you all the lines are busy in a condescendingly dubious tone and the candyman grins in the corner blaring early hip hop incantations like some sort of half-gone teenager leaving traces of his sickness all over the tupperware bowl of your soul. Grease fat drips all over your precious Ipod from the headlights in the ceiling and your ultimate playlist is scrambled into darkness split with lightning in the night. That hand you call your conscience drops like a rabbit raced hard against foaming dogs and high fructose corn syrups runs into the IV keeping you alive. Until you are comfortable with yourself you will be kept alive with superior treatments. You'll swerve lazily across the ominous sky; blimplike, suntanned, peeling, and burning. Only until you are comfortable with yourself will the honey bee stop droning over your head stinging the very air you breathe. Beware though. Those who come down don't feel much better with themselves. The conscience will still be there.
Posted by Dirty Consumer at 9:00 AM No comments: