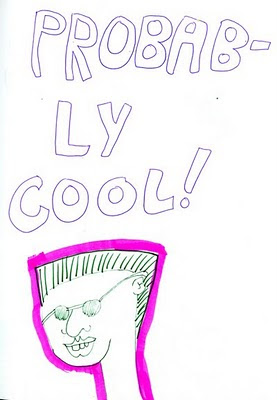 He knew when he slipped on those completely stupid shades the neon pink would envelope him like the abrasive arms of an insipid mother treating her infant with creationist myths. He realized upon the don of these shadez that the man he'd become would be found tangled among the brambles the next morning, screaming. Or, perhaps, found marooned upon the beach tied to a buoy, screaming. No doubt it would be the morning when he'd be found. It would be stylish and sexy and slippery like whale skin. Sopping, dripping, sudsy little wastrel keen on losing the mainstream to forge a new crystallized passion path of glitz: He'd open his eyes fluttering and crooked capped red skinned saps would shackle his wrists for he would be too metropolitan for this world. Luckily, the cage they will put him in will have two doors and a dual vestibule design. This to encourage sexual visiters to come in through the front, leave through the back. That's just to avoid confusion. Those staring through the bars, blowing kisses, can't seem to get it straight when there are people coming and going through the same door. Entrance and exit are distinctions of clarity. They mustn't be blurred. He knows if these lines are crossed, all will be lost. If these lines are crossed, he won't have a sensuous saunter as he creeps down the street: he won't have a dazzling effect on every little thing that enters his raunch radar and he definitely won't leave an impression upon the daughters of governors left dying on the vine. And we all know those daughters are the ones that keep the bullet holes from taking down the careening Ford Bronco stitched upon his heart. How cool is the coolest of all speeding recreational vehicles? One mustn't think too hard upon this point. Unless, of course, one has created some sort of simulacrum that shields from the realities of a high speed blast down a stupid road; the notion of cool, for example.
Posted by Dirty Consumer at 3:24 PM 1 comment: 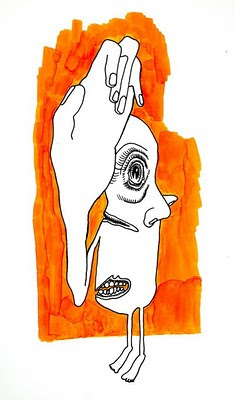 Baby boi born bleeting but not bearing straight towards; more like a crooked little finger egging ever onwards. He is Lil Picasso and he's been boggling minds for at least sixteen months crawling around in stupid muck keeping his mouth-like orifice filled with jibberish. His crib, plastered with gang warfare teen dream slop magazines, isn't fit for a conventional child protection services officer. With a the flourish of the wrist like the well placed kick to the balls of a probation officer, Lil Picasso often wows the crowds gathered at the Decatur farmers market. Though he seems to be under two years old he shows up to various community gatherings without any noticeable guardian in tow. The jungle gym is his mortal enemy, as this is where all the sniveling, sportily dressed choice children gather to swing their underdeveloped limbs about in gestures of faith. They've been brought up to believe in the empirical and so they test their bodies physically; all the while Lil Picasso stalks the outskirts of the playground dreaming up Donner Party plays constructed with Jonestown themes. He knows that what he does is mystical and that is why he slowly sews together a cape made of material torn from the backs of these pre-masculine children of the jungle gym. Parents are lacking a sense of proprietary righteousness inherent in everything Lil Picasso lives for. Crayons melt in his grasp while scented markers barely bring a vestige of cherry to his olfactory nerve. His patents cover everything from memory loss to purity laws. Though he is faithful to his creativity, he believes nothing but insanity distilled in freakdom can bring about true change to the mind of the plaintiff. Bail set like a boulder on the edge of a cliff, Lil Picasso doesn't see the point of the cage we all live in. As he rolls around in a pile of leaves in a random suburban front yard sneezing, he wonders why all around him seems like a dream.
Posted by Dirty Consumer at 3:00 PM No comments: