Ornament of Our Lives Outlives What Deprives. Holiday Edition. 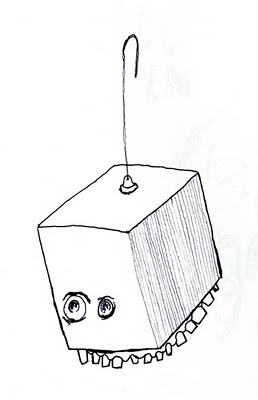 The birth of a king is always well regarded amongst those driven to holiday creation. The tree sways under the burden of another ornament and your strange uncle unabashedly treats his body like a playground amid the falling pine needles. Have you eaten too much? Or had a dozen too many booze drinks? Or slammed a square of fudge too many? You mustn't let your mind stray away from the truth: Nothing is wrong as you slide into another holiday delirium. We've been raised on replicas and faith in winding roads, according to David Berman (a Jew). Though there may be a disconnect with the religious, just hold joyous commune with your deep fried Legos and sweeten your eggnog to the point of insanity. Lovingly massive, our competive capital is losing its virginity in a department store while toddlers scream amidst a wailing drunk Santa Claus with scissors clutching. We're moving en masse through fields of white with car insurance policies gleaming and problematic tendencies tucked deep within our red velvet sacks. Those who are good keep their lips tucked in and we are the chosen. We've arrived at the perfect gift of eternal satisfaction and Peruvian switchblades imported for proprietary free trade agreement with the militants. Roads winding, replicas trembling like lost wastrels swept up in the arms of vagrants, we've all got our plastic evergreen smiles on and itchy boas entwine everything we've made up. Crumbling effigies of obese bringers of gifts swing out over the gallows of the suburban mall to the cheer of the over stimulated teenagers. They writhe on the floor to pounding dance beats, awash in Ritalin and fixative. Groupies leave the club in order to powder their noses with charming albums. Musical balladry takes on a hue of cinnamon and ivy. Money leaves every hand whilst a sweet smile graces Lil Bennie Franklin's face. A deafening jingle echoes across the chambered halls of Commercial Embrace. We all love one another. Let another year ring itself in while we bring ourselves out for another fleecing.
Posted by Dirty Consumer at 3:23 PM No comments:

Misappropriated Funds Leave Without a Trace. 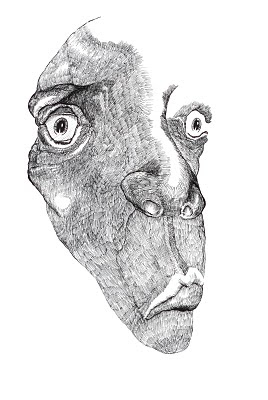 Teething on a rubber ball like an impassioned pup keen on survival, he burned a hole through the fabric of reality with the vacant fervor of a street preacher living by an ever-paranoid world view. Southerly winds caught upon his over exposed brow. Zoologists were currently describing his behavior. As of two hours ago it was uncharted. He didn't know why things had to be laid down in scientific law. For him life was more like a jigsaw puzzle with pieces missing; judgemental gaps in the flawed existence he lives. With shaky hand he attempts to map out a cauterized scar that resembles his tonage. Weighing heavily is all they seem to do, memories, so he just stops as soon as he starts. But the outside keeps dripping into the inner sanctum he's constructed around himself. His personal life is a cartographer's dream; full of dim mystery and greasy bags of money. His mind overgrown with foliage, he stumbles out into starstruck traffic, headlights screaming. Where had this catatonia sprung from? Maybe it's a self-imposed ignorance that keeps him from light. The experts lower their expectations for flight. He must be land locked. He'd been touched by an internal sickness to be lost. Some say it's another form of self preservation. Monkey barred, unconscious, tell-tale, trim, and over medicated, he fears the moving shadow; the abysmal harbinger of truth that is the modern attempt at locating his fears. If he weren't so consciously unconscious one could say he was actively avoiding detection. That theory cheapens what may be the truth: He is Uncharted because he is only superimposed over the vision of reality. He'll soon be drifting away like the last grains of sand within the hourglass; never to be gauged or accounted for.
Posted by Dirty Consumer at 2:32 PM No comments:

I Shook It With an Urgency. 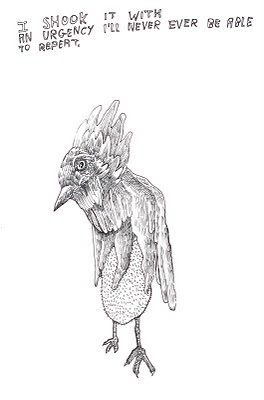 He was beginning to feel like a piece of the continent fractured millions of years ago; drifting into the sea away from what he knows. It's as though he's become something unthought of while so enclosed within himself. The structure of his life maleviolent and everchanging within the confines of solitude. A piece of himself is missing; he's worried it isn't what's inside himself that makes up what he is. He's worried he is made up of that which he once surrounded himself with. And now what surrounds him is ever present memory. He's not so sharp anymore. Not so keen. He's dull and waning and wondering. He's overly kind, probably boring, and drumming his support muscles into aching pain. It hurts to lift a pillow. A sense of internal disappointment builds with each social interaction, prompting an increase in isolation. He thought he'd be stronger than this. He thought he'd be the toast of the world. He didn't know that the network of friends he'd created in the past was a form of life support. It's a good thing in a way: to realize you need everyone you love. But to be away is like the pangs of the phantom limb. Laughter that isn't there. He longs to stem the continental drift within himself. He is the piece that is missing. He wanders further from the whole. Oh, sad sack bloated with memories, this mind that tortures.
Posted by Dirty Consumer at 1:55 AM 1 comment: 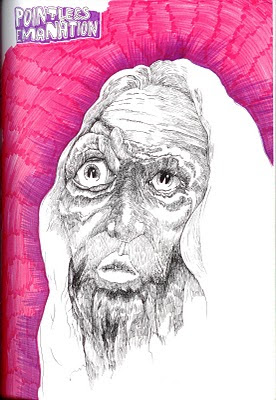 Looking up at the squalor of another fledgling sunrise brought him yet another conclusion. He'd been walking the surface of the turning world as the undead probably too long. Yet. Another. Pointless Emanation. Were those signs in the rays of bright abandon or just a fleeting example of all our lives brought to a daunting close. Mortality seems like the end. Not for those with a second chance to wander. He'd thought he was dead when the brick that had been flying for hours finally connected with his forehead. The heartbeat quickened, then slowed, then stopped. Then he was resurrected. He awoke stumbling up onto his knees and there was a crowd gathering with cell phones filming. He has risen. Pointless Emanation. He would semi-live to somewhat see another seemingly endless day. His torso cladden in a torn trash bag he flailed in the winds of dawn; fists clenching, unclenching, jaw drawn in a tight foreshadow of what was to come. He was homeless, dreamless, suntan-free, and billowing. Too few could see that his eyes cast an empty longing that resembled the dim pang of a tincan kicked down an empty alleyway at dawn. Cannery Row was his favorite novel; this favor emerging from a learned mind hoping to grasp at the straws of hobo-centric optimism. The classics taught him one thing: the life once held with love now lost could somehow been caught in between yellowed pages of novels written across centuries past. Those things that were gone could be captured within prose to be set down in stone. That's, he thought, the only way to reach an end to searching. Bring a close to this life just so he won't have to keep up this savage charade. But then again, he had already been cast down by mortar, only to be brought up in a post 20th century world. Was there any end to these Pointless Emanations? He thought not; possible pointlessly.
Posted by Dirty Consumer at 2:46 AM No comments: 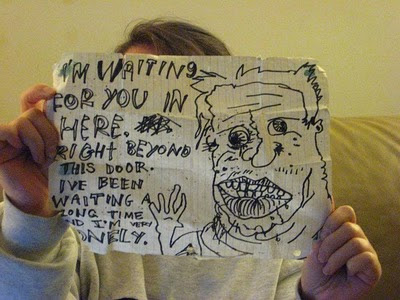 A long gone memory resurfaced with hands grasping whatever it was that made me a passionate drunk in the first place. It was hung askew, drawn bent, questioned widely, dreamt belligerantly. The sign hung upon a door shielding a poor, sober student from countless inebriated assaults; screeching incoherence, pawed inconsistencies, passed out wastrels sagging across the staircase. Often two towering whiskey drunks slung their insults of 100 proof breath into each other for laughter, insanity seen by most; the reverb of these delightfully tact-free interactions oozed into the room. The room in which a lonely man sat, guarding a tired soul. He's lonely. He's was waiting a long time. And he was there for you right beyond that door: Waiting. It was an empty threat, this man's droopy hand, but it was a latent one. A threat that seemed to waft into the room like a series of blast-drunk yelps at 4am. A legend was being built upon gallons of distilled liquid, droning cigarette clouds erupting from dank basements, whispers of windowpanes shattering out their insides after being wounded by a BB gun. Fireworks left glowing streaks of smoke under swaying chandeliers while the Lebowski machine spoke of wondrous lifestyles of limber minds. Muffled thumps were heard behind a wood panel door that marked the beginning of the gimp room. A spare tire hung from the porch above two broken out televisions that begged for attention from the neighbors. A shattered twinkling disco ball warned others of gross injustices done to our realm. Nothing could take away what the man upon the door held throne over. We all were what this man upon the door was: searching for that which would keep us company. May we all see that door open.
Posted by Dirty Consumer at 3:24 PM 2 comments: