Shadowboxing in the Dark. Weird sire: sitting there looking at me looking at you. We've both something wrong. Rolls, over consumption. The Rolls Royce traipsing down the boulevard with the starlet enveloped within, crying her eyes into streaks. Rolling the car, rolling the minutes over, rolling the cigarette at 4am. The internal surroundings gleam red hot when I imagine someone else is looking; pokers, coals, errant tasks, lovers, movers. I realize that I half realize everything to the point that we are not in the place but out of it. Nothing makes sense because I am sure someone is watching. But I had a chance and it meant a thing. The thing that seems to whisper out there among the pines with a feather softly swaying from its earlobe. I want the wind to pick up and show this to me: the ever-present anxiety of a lifestyle vague and unremitting.
There he is, his legs dipping into the cold. As old as the fold in the ocean. Nothing. I watched it from afar in a trance, too scared to move: falling through the ice in the soft and narrow and getting saved at the last minute to forever change the course of an entire cycle of family and past. Who was it that was pulled from the current? In the physical it was him, but in the clouds up there it could have been us all. One tragedy is one too many.
They took away the part of the bridge I liked and put something else somewhere else. I don't even know what the problem is. I don't even know where this wanting haunts me from. I'm delusional, thinking, I've got this and not that. The closed door, the muffled sounds heard from the other side. I can't get my head in the present. I'm spending all my time gilding the past like it was something it wasn't. And the sparkle doesn't go deep at all. It only sits on top. Like the truth. It's right in plain sight but I lift it up to look under and there is nothing but what I'm holding onto. My hands are shaking and I'm frightened of death because I feel alone and don't know what to do about it. It's me that's doing it. I'm telling my heart to shut down. I'm willing my love to fuck off. I'm hanging it up and hearing the busy signal while the illusion of what I say I am waits on the other end. This self that doesn't exist. The supposed nice guy, hand cuffed to a suitcase: It opens and the light pours out. Yet, it is never revealed what is inside. I look in there but it isn't me who's looking. Because no one is looking.
All this unkempt feeling. Trying to explain its existence just makes it grow. I don't want this strife anymore. I want a knife to bore deep and cast this exceptional problem out into the past. The last of it moves fast and I open my eyes to see that I'm an adult with a loss for a heart. The part I keep is the broken part. I will box it up with shadows to keep it still.
Posted by Dirty Consumer at 9:00 AM 1 comment: 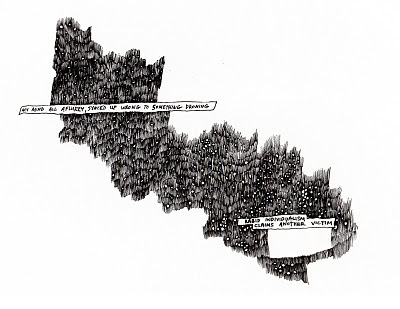 I felt it and then I didn't and I wrote it down but it couldn't be found. I jumped off a high place with everything blurring around me like headlights on the highway nightscape with the aperture wide open. When I look out over the expanse the sparks keep me quickly throwing my hands to my pockets to make sure it's all there. But it wasn't there to begin with. My face slowly contorts with fireworks making their final entrance with a whoosh of embers and gasoline. These things we are made to think are ours ignite into flash and light. My hands lay down along the riverside and the crew yells cut but I don't get up. The water keeps its current and the clouds lose their path. My eyes rotate: they get red and loving. I want my life to be something that is left behind for the treatable illness. I want to keep sway in the near twilight when the body has given up. A rubber thing all dead and lively, up there in the dark.
The tachometer underneath the skin covering my forehead lets me know pretending is fun and feeling the temptation to take a risk is quite the same as seeing my hands do things I didn't approve. The whole thing that we all do. The everything we say our lives are. The things we say to ourselves. These loose strings are our hands doing things we didn't approve of.
Control, control. To have control over this. Seeing the car that holds your family leave your sight and your hands shake yet they keep going. Its something you can't see; the next track seems to be a big deal, but control is so elusive. They're right around the corner. I tell people things but each statement is a prayer for myself. I tell people what I wish I was. It's just so much easier to tell everyone to be what you want. And deeper is understanding of a thought. There is something underneath everything. I just hope that what is above things I do is something looking down. No more of this kept at bay feeling. You know it's not the truth: its not. I don't want every spark to be my basis for life. I want something to build up, possibly fall. A continuation of things is not giving up.
I put all these things in my body that tell me I can't live without them. I believe them until I'm absent from the room. Getting distracted by the refraction of the sun and knowing the world is a ground upon which seven billion trod. I kept something in my heart to make me special but it's weathered day by day. Because I have a feeling that all these torrents of emotion are nothing. Concession, concession. Why keep this absence going? Closing my eyes, an afterimage of fire dancing upon the insides of my eyelids.
Posted by Dirty Consumer at 7:22 PM No comments: