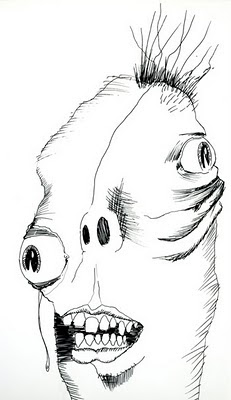 His is a life of solitude and horror. He can't talk too fast. He isn't much of a looker. He often feels inadequate size wise. The baggage strapped to his brain tows heavily upon his ambitions and aspirations. And to top if all off, his heaving breast of a mother had named him Pookie in a fit of stupid rage. Huffing spray paint isn't much of a problem as he stumbles into a Wal-Mart with visions. Being knee deep in skin mags had gotten him no where and it was time to "move on." He had heard he would be able to find a "Stephen King novel" at this establishment: he was looking to be enlightened. Long ago, before his skin condition, he had been told of literary adventures sure to loosen him up, idiot savant like. He wasn't maladjusted. He just wished he could spout uselessness like all of his acquaintances at the eCoffeeShop. This all to further himself from the inevitable question: Why did he have to fall in love with something that had never noticed him? What was to be gained of longing for a dead affection stripped bare forever ago? Wandering amongst the romances, the westerns, the mysteries, the horrors, he couldn't pin down where he was heading; towards or away from a cliff. Alee of winds within his own mind he longs to bare the storm and weather his opinion with the hatred of others. Just to burn at the stake seems akin to dreams come true. He wants to proclaim he is king of book club international with tomatoes flying. He wants to hook up with a "hot chick with sweet jugz" online. He'll show them all that he can discern between no and no way and maybe if you dont take off your pants. He has learned to ask a sexual broad to "just put the tip in" to get his foot in the door. He can claim he reads books; though he has only gazed at the directions on a box of Stouffer's Mac 'N Cheez while huffing silver spray paint, he feels that his now frazzled attention span can bridge the gap. Thus, his grip lands upon a thick volume. His mind wanders...Under THA DOME?! Wow. This is soundin' zoned. Keep on keepin' on, his step bro used to say as he slapped an aerosol can into his hand. "Here, read 'dis, read so hard you can't see straight." It was a rite of passage in his house and now he was longing for more. "Pookie," his step-BRO would say, "you've gotta move onto tha heavier sorta readin, like airplane glue 'n gasoline." But Pookie wouldn't have it. He needed the love of others; especially from those who had never laid eyes upon him. And the unanswerable void of his mind has decided how to do this: get educated all up in his dome. He stops listening to his stomach turn the sandwich he ate into poop just long enough to purchase a "Stephen King book."
Posted by Dirty Consumer at 11:30 AM