Love is a Bitch. 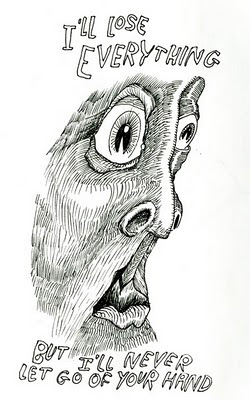 Dementedly challenged was his heart. Tear streaked was his face. Blood beaten down and filling slowly with heart break he clings to the shattered pieces of his once flush dignity. The trump card that was love had taught him he was over and done with by the likes of happiness. What was this pointless journey into lost romances? He never found his morals intact. Instead they are like dusty records left in the basement: warped and broken. His trust had been maimed; a twisting, writhing path quite like the winding trail of crimson left in the wake of a hooked fish. Oxygen has been cut off too long. He is a vegetable. And so he clutches that which he has already lost. Like a phantom limb. Like the tooth fairy's mission to take what was once your smile. A row of teeth he'll come to replace, he tells himself. Poor poor hope. Poor little wasted soul turned strange. He was not one to leave behind a wall erected around his heart. But he had done it for one fleeting moment. And now his inner yearnings seem more like maze than moat. Castle burning and castle crumbling, he'll treat this memory like a medieval form of torture. The iron maiden was his mistress. The rack keeps pulling the bindings ever more taut. His limbs seem useless yet bring pain. The rending of arm and leg, the tending of phantom and ghost, the sending of loss turned hope. This is a war that doesn't require much thought aside from one's last words. "Only those that long to be true can ever lose sight." With the saying of these words, he was dead on arrival. The tender gesture that is a warm hand holding another is only that: Nothing more than an apparition's caress. He had lost her so long ago yet the the memories persist. He is in denial. He is in freefall. He is inconsolable. Let those who keep their hearts intact never stray into this man's world. For this world is dark and dire. For this world is one of ice. This world is not for the happy.
Posted by Dirty Consumer at 3:21 PM