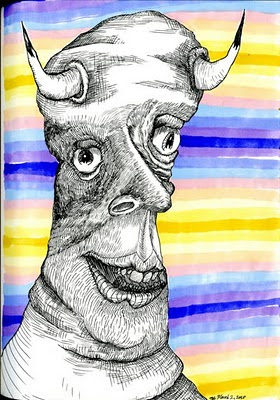 No one remembers the little brother of the haughty Minotaur. Poor, possessed Pasiphaë, his mother, couldn't resist that sexy nautical beast thrown upon the shores by the curly, brazen Poseidon. Even after giving birth to her bull headed son Pasiphaë still lusted after the bull. To the chagrin of the cuckolded Minos, upon opening the backdoor of the honky tonk bar he owns (Maze 'O Drunk) he beheld the sight of his lovely wife gettin' ragdolled upside a dumpster by a gift from the God of Sea. Raged out, for this was the second time his love had forsaken him, Minos flipped Pasiphaë the bird and splattered the used grease he had meant to dispose of upside the bulls head; this action of course causing the entire scene to get so much more sensual with meat laden lube. And so the Minotard was concieved. Unlike his older, perhaps keener brother, the Minotard was not confined to a maze. He was, instead banished to the rec room with a 120 color set of Crayolas. He's been in a time out for eternity. And it doesn't seem like any of the other whiney lil babies in the rec room are going to slay him any time soon, as his elder brother was slain so long ago within his maze. No no no...for one, the Minotard wieghs 3500 lbs. For another, he's been rolling around on the Care Bears throw rug situated in front of the Barney viewing area lolling his tongue for 81 years. He has peanut butter caked on the nape of his horns and no wetnap can get the fudge off his mane. His binkie must be replaced every thirteen hours due to grinding jaws and all the other children fling Lucky Charms into his tail. The last time his father visited he mauled the hall moniter and copulated with the school mascot. His grandfather apparently killed 230,000 people in a tsunami a few years ago and he won't be coming to visit any time soon. While his ear medication is administered the Minotard flares his nostrils and swings his mighty horns. While eating his Gerber Carrots he usually attempts to stack his ABC blocks way too high. His lincoln log cabins are never structurally sound. Lest ye be skeptical of of the Minotard's mythical abilities, just take a gander into his diaper to view the shitblast he leaves daily. Please treat him gently when taking him from the playroom, he is very sensitive to light and liable to charge into anything he sees as a threat; a school bus, for example.
Posted by Dirty Consumer at 7:33 AM