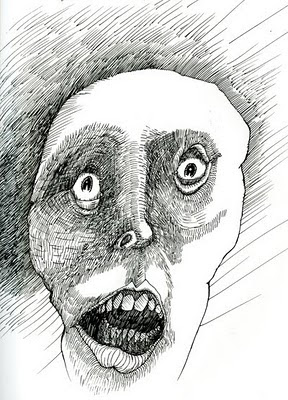 "Nothing prepares you for full departure from reality." He laughed when he originally heard this. A plaintiff few chuckles that fell out of his mouth as he poured three "Sugar Crystal Rock" packages into his "Caffeinated Beverage." The teeming life behind the eyes of the feeble, broken man who had said this to him slowly warped itself inward. Obviously a mess of tangled wire and debunked software, the invalid liquefied into the pavement and slid down a sewer drain. A single blue flower grew up from the ground and he looked up just in time to catch a red eyed squirrel scream into the ears of an old woman wringing her hands like soaked rags. I'm going to disregard these things, he thought. But it couldn't be done. An asthmatic child skipped across his line of vision with a chilly green afghan trailing his heels while auras of psychotropic detail swirled around the blood trails left in the boy's wake. He was truly losing it. The sky finally crashed in dripping acidic industrial runoff down upon the scene before him. A dam imploded inward and the doused town he grew up in flowed down to the lower banks of his past where picnics were ruined day by day. Lifting his hand to his face in grief he is terrified to realize his entire face fits into the crook of his palm. With his fingers wrapped entirely around his scalp, tears flowing through the oversized gaps in his fist, he slowly descends into a pit of quicksand while the car he lost his virginity in soars through the sky above, swirling in a cyclone. The windows explode as the viscous thickness of quicksand pours into his cup of coffee. It's not that he is completely disappointed, but it just seems as though his meager existence could've been left behind with just a little normalcy.
Posted by Dirty Consumer at 12:12 AM