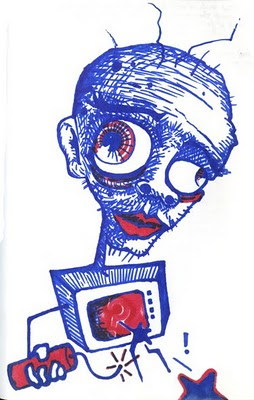 On the eve of another day of dread, the television stares out across a living room teeming with telltale signs of recidivism. Broadcasting a 4am melody of dream states without hope, a lone media imbiber sees what his television truly is. Firecracker. Thought taker, tear maker. A burgeoning sense that all is lost from this world of media injections and drug increase. A life spent with blaring moving images cast upon a hallucinogenic surreality etched out in shadows of saturated crimson blue hues. It bleeds out like crushed roadkill that isn't too much more than something that has twitched it's last twitch. Creationistic ooze jumbles his leprous psyche and a baby boy with lulling milky eyes erupts from the body of the set; a fibrous weed twitching, holding explosives spelling an end to recurring episodes. Starlight, star bright, so full in flight when slaughtered tonight. Ecstatic departure imminent the suburban waste of flesh lifts to the soles of his feet for the first time in days. Cheetos, Ritz cracker crumbs, gummy worms rain down from the yellowed front of his t-shirt. A sickening grimace erupts from the brown leather La-Z-Boi as it releases its grip of the ballooned torso. Montel Jesse Springer screams out to the man: SELF IMPROVEMENT IS POSSIBLE AND YOU WILL NEVER SEE IT COMING WITHOUT IMPROBABLE SENTIENCE OF LOSS! Redneck marriage counselor parades across glittering stage to applause of slack jawed voyeurs eating foot longs laden with insane nutrient overload. So far the weather is partly-sunny-sky'ed and gusts are in excess of 40 miles per hour and the NASDAQ keeps tanking your plans to trade in your supple breasts for the longing unfulfillable. Slowly, ever so slowly, a Keebler elf free falls from the screen and eases down onto the carpet vomiting blood full of cookies. Lifting its cute tiny head and looking straight into the man's eyes there is a spark of glee. A crackle begins. A wick ignites, flaring out sulfurous gas that bubbles into the nostrils of the now proud, now standing man. The living rooms sways around the man as he Hulk Hogans off his yellowed undershirt, screaming, spraying spittle across the wreckage of his household. He's living out the last moments of his life. He's sublimely entertained as the ghoul of network television detonates, leaving a blackened, high fructose crag of carbon amidst a gridded neighborhood. Ice creamed neighbors wander into their yards. Noticing a scuff on his BMW, the neighbor across the street fetches his buffing towel as ground zero fizzles out in front of various indifferently glazed citizens.
Posted by Dirty Consumer at 2:46 PM