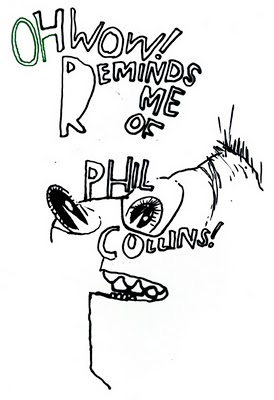 He couldn't dance. He couldn't walk. He sussudioed all over his own face so many times as to scar his likeness unrecognizable. His widows peak kept wisping into a Genesis-like formation. His drums were beginning to take on an epic, booming quality and he couldn't stop wearing his microphone headset. It all began with an exclamation in a late eighties haze: "No Jacket Required!" With the drop of that terminal phrase his life proceeded on a trajectory similar to that of the manic depressive having made the choice to step off the window ledge. The spa began bubbling with red swirling champagne. He was hooked and there was no escape. He was Philled to the brim with Collins. Though he felt it unfashionable, he began shaving his head. Though he felt it unfashionable, he began taking full headshots for his fantasy solo album covers. Though he felt it unfashionable, he began wooing hot middle aged women into unanswerable, questionable positions and censoring their faces for the documentary. Peter Gabriel began calling him on the phone to scream sexual obscenities and no one but the cheesiest of cheese dared to grope his crotch. The Story of Genesis takes on a new meaning as he sifts through the meaning of his life; a serious amateur gold miner sharing his hours of desolation with the soil in hopes of discovering something of worth; but all the he finds are glittering Radio Super Hits that bring him further into the fan club of ultra pity for nothing and everything. It's a fist pumping jam that tears his mind apart further beyond repair ...But Seriously, he asks himself. No one will see me this way, right? They all think it.
Posted by Dirty Consumer at 9:31 AM