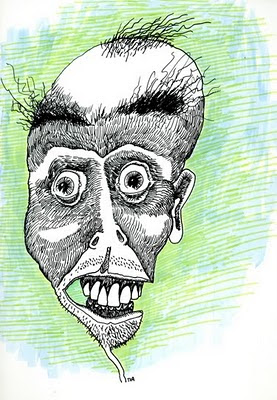 He knew he couldn't come around anyone but he'd never tell those he wasn't coming around. His emaciation level had brought on a particular lone quality and he couldn't climax without the help of solitude. Only himself. A loner of ecstacy. A loner of pleasure, love, maturation. A loner of sticky dripping sweat; kept and wept and lost and bereft. Solitude bringing about intense, erotic egomania to the point of massive memory collection. A sickly little memorabilia fucking down every timed interaction with those he hates, loathes, defies, keeps, weeps for, cheapens, endangers, panders, jams on, and fucks up. He's left behind. He's crept behind. His deft rewind of what has past keeps the treasures of Freud sunken. He doesn't want to know why human heat frightens him. He doesn't want to know what the shakes mean. He won't confront his mortality. He will not ford the river of sadness his life has become. The fun that clambors down his staircase like a piano with fruit bowls keeps him up at night. He tosses and turns in his bed thinking of That Perfect Panic Room. The one where he'll utilize pure solitude to pursue and perhaps peruse the various baubles and jimcracked out bullshit within the cobwebsome depressions of his cranium. For pleasure is all in the eye of the beholder; and if that beholder beholds nothing but himself let him behold all the has been held within himself. Lest history decides to rewrite itself within the confines of itself, this shall hold true. Looking in a mirror excites him to the point of probable overload and he sinks within himself; the polyp of humanity slowly consuming itself for nonsensical ideals.
Posted by Dirty Consumer at 3:02 PM