The Future Enabled. The Past Possibly. 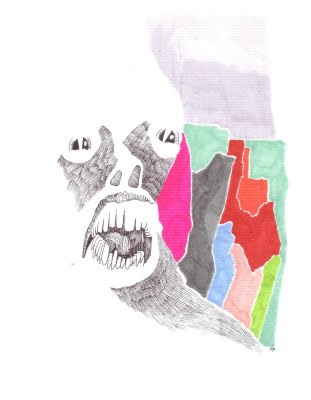 The future is a mess we all know how to clean up. If the past is a mess, it was meant to be. Pouring into the riptide the enabler feels this epitaph sink into his bones ticking and swaying.
Don't leave my emptiness unfilled. Don't unlose this loss. Don't decant this morose and pitching love. Do not tear up this feeling. For his zealous actions there were passwords scrambled into cryptic enigmas swaying lovely drunk on mescaline across the streaming catwalk of the internet. The digital mistresses all called him at the same time demanding a broken family, a wife left behind. The subject line kept blinking all acursed with a cursor; driving him up the wall as if the highway went straight to that waxen moon like bone dramatic in the brilliantly empty night sky. He doesn't have anything. A plastic card dripping numbers and security codes and years of direct deposit all credit checked and loosed upon a serious wrinkle in his forehead. Wimpering fine, ribs tuned like mandolin strings, he enjoys long walks on the beach until the surf laps upon his singing toes to woo him into the rocks beyond. He stirs awake to crash amidst the commiserating outcroppings of stone, sent there by the arms of the ocean. The riptide and the empty heart lost within one another's eyes; an astronaut harvests useless rocks on the other side of the moon where the enabler can not see why the tide keeps its time with this body relenting across the sky on a diet that leaves its body waxing and waning unhealthy and bright. It's all an illusion, the crescent, the full, the past, the future, the loss, the gain. They're all just some sensation merged at the edge of some pointless shootout set off by some misunderstanding told in the script, illuminated by fertile verse and cunning insight. Let me look upon my life with keen understanding, thinks the enabler as his body crumples upon the desolate makings of the shore to the cheering of the vast body of water surrounding every piece of land we have ever walked upon.
Posted by Dirty Consumer at 4:44 AM