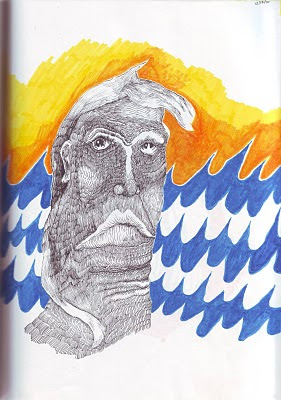 A dramatic outing with the sea turns gray and taciturn. The sky overhead is a low ceilinged red burning center. Crouching like a dental implant within the mouth of a careless mentor, Sea Boy slowly emerges from the depths with a body like a bottle of spirits. Ten long days underneath the surface and he was seen off the coast of Gibraltor dreaming of a lifeless doll. The sun kept it's wager and the water lapses when money's spent and the kernel's popped and the debtor tripped the wire. The explosive detonates in slow motion as the helicopter sways gently with a frame rate capturing the debris and body parts. Sea Boy rises upon the swell underneath with a bonfire for a heart and a fur coat for a ribcage. Flawlessly toned and manipulative, his deft style with water sends him skimming through the bay to clip an ocean liner. None finer, a notion drifts through his gait as he stumbles up the wharf in a barrage of grapefruits, geriatricidal mumblings, gooey choices, and moving images sprung from the mouths of gear heavy teamsters. He joins a union, gets a loving wife, and tells off his brother. Though a domestic partnership has drawn his left hand, the one that makes all of the problems, taut, he feels the absence of the sea. He stares out over the bay as ships lose themselves amongst the waves. The tears are too akin to the sky as it reflects upon what he's lost. He will not be pulled away from shore so quick as to be fateful. He'll hunker down and grind the foreman for a wage increase. He'll make changes to his ledger in hopes of lessening the ire of the ball and chain. He'll deem the existence he lives through worthy while auditioning for a drama that used to be his life. Sea Boy loves to keep his heart wrapped up like just like that.

Posted by Dirty Consumer at 8:55 AM