He Smiles for Lack of a Better Idea. 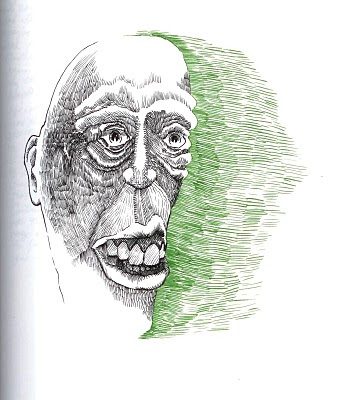 Who is that tired dog with that restless drone in his eyes like the cascading tide of a drama class screeching to a dead halt? He's putting on his best shoes to kick shit up into the night air with his dim grasp of reality aghast and pale the only thing keeping him country. Lone wolf of midnight; teaching delirium tremens to keep their throes productive and slathering. This moot point that is his life keeps getting bigger. Heaving like a forgotten beast in the depths of the sea that is his mindscape, them darlings sneering across the road are some kind of comic book from his childhood. All those missed questions. All those marks on the record. All those pity mongers leaping over hurdles to stumble crashing through the fragile styrofoam insulation within his skull. No they can't do what he couldn't do for himself. They can't teach his body to become biodegradable. He has a half life of a million years. He has a menial job cleaning up after militant teenagers. He hasn't seen a naked woman in sixteen minutes. He saunters into a hole in the wall and literally quotes something from a passage written in his spine. "What you are is just part of a reference book. It's all common knowledge." The experts told him long ago his smile was just a smile. His teeth weren't tombstones on a moonlight silent expanse of red sand. His brow was just skin. His eyes weren't going to lead those lost ashore. Like a flower in the coming winds of fall, he wilts to think of the night ahead of him. It will be depraved and full of salt. He will render the ground he walks upon barren. He will puke his guts out clutching a looming dumpster full of material akin to his lifestyle. Just another night to keep himself in line. The leash is a mere sixteen feet of freedom. The dog struggles to careen blindly into a wall.
Posted by Dirty Consumer at 2:49 AM