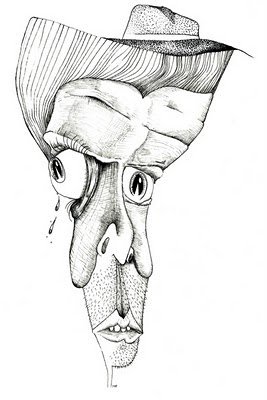 Could it be that the nickname bestowed upon him was a premonition? JazzHands shakes his sickly mind back and forth, setting the crumpled hat upon his head into a lovely spiral of confusion almost as debilitating as the sort that roams within JazzHands' brain. He's been in this alleyway for years, his hands have been twisting their deformed circles for months. And he doesn't know how they got here: those shakes that now set him in a caterwauling reel. Creeping around dumpsters, upturning stacks of disheveled winos, crunching broken Mickey's bottles underfoot, Jazzhands realizes he is where he wants to be. Underneath all that is what he was and will be is what won't ever be. A tiny child within another child that fell off a pile of bricks and dashed out its GooGooDoll Special Toy across the shattered grasslands of Total Shit.
Posted by Dirty Consumer at 7:29 AM